I’m about a week late to this but Egypt’s transitional military government has released a draft law of the country’s new electoral system.  The draft is somewhat short on details, such as minimum thresholds, but the basic thrust is that 1/3 of seats would be allocated through closed-list PR and the rest would use the individual candidacy system that is currently in place.  This means that each district has two candidates and each elector gets two votes.  If no candidate receives an absolute majority in the first round, a second round is held one week later. 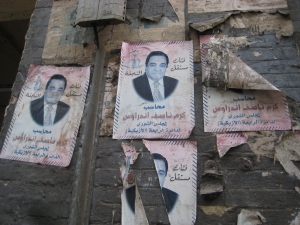 A rough translation of this from the draft law:

I will have more to say on this, but my main point is the individual tier, as it exists, is highly candidate-centric and will greatly weaken political parties.  In particular, the two-round, two-seat system creates an incentive for local elites to make grand bargains that further undermine an already weak party system.  Two elites, for example, can make a bargain where they tell their supporters to cast their two votes for each of them – a de facto joint ticket.   Those same elites could then make separate deals with weaker candidates.  This would entail a  promise to support the weaker candidate in the second round (should they make it) in exchange for first-round support for themselves.

The nascent party system in Egypt is very weak.  A recent IRI poll shows that of all existing parties, Al Wafd garners the most support with a paltry six percent.   Parties as institutions also suffer from worse approval ratings than state-owned media and the hated business community.  Creating even a small PR tier is a welcome move but I certainly hope the final law will make it much larger than 1/3 of all seats.