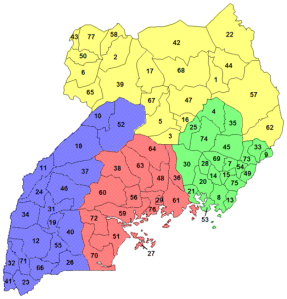 In Patronage, District Creation and Reform in Uganda, Elliot Green argues that Ugandan Yoweri President Museveni has used the creation of new subnational district boundaries as a way of consolidating power through traditional patronage means. Looking at several African nations, Green notices that new boundary creation tends to increase as presidents’ margin of electoral victory diminishes.  By creating new districts, he argues, regimes are able to offer better services to targeted segments of the population.

I think the main takeaway from this paper is that like the structural adjustment programs before them, autocrats have managed to manipulate decentralization efforts in an effort to maintain traditional vertical power relationships.  It’s just sort of a given in development that decentralization is a good thing. The theory behind this is sound but there is lots of evidence that it doesn’t really work.  To be fair, this isn’t the most egregious form of corruption; new boundaries don’t have the deleterious effect of useless ministries.  Still, it’s worth keeping in mind the next time somebody you here somebody spouse the unchallenged benefits of decentralization.

Posted on May 29, 2011, in Development and tagged corruption, decentralization, Uganda. Bookmark the permalink. 1 Comment.